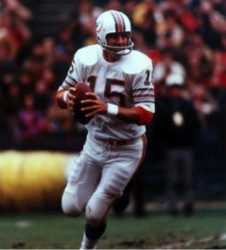 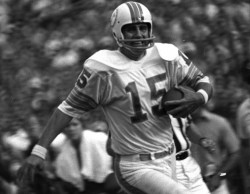 Earl Edwin Morral was born on May 17, 1934 in Muskegon, Michigan. After leading Muskegon High School to a football state title as quaterback, Morrall decided to attend Michigan State University where he would play both football and baseball.

At the close of his college career, Morrall had to make the choice between playing professional baseball or professional football. Electing to play football, he was drafted in the first round by the San Francisco 49ers in the 1956 NFL draft. From there began his 21-year career, playing for the Pittsburgh Steelers, Detroit Lions, New York Giants, Baltimore Colts, and Miami Dolphins. At his retirement on May 17, 1977, Morrall’s stats boasted of 255 games; 1,379 passes for 20, 809 yards; and 161 touchdowns.