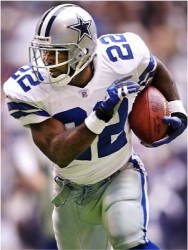 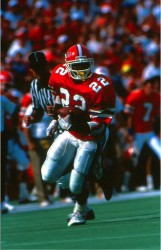 Emmitt Smith is regarded as one of the best running backs in SEC history for his career with the University of Florida Gators. He was named the National Freshman of the Year in 1987 when he finished ninth in the Heisman Trophy race. A consensus first-team All-America selection in 1989, Emmitt was also named SEC “Player of the Year” by league coaches that same year. That season, Smith finished seventh in the Heisman Trophy balloting. He completed his junior year with 58 UF records and 3,928 rushing yards, the top total in school history and fifth-best in SEC history. Emmitt was named a first-team All-SEC selection 1987-89.

Selected in the first round of the 1990 NFL Draft by the Dallas Cowboys, Emmitt earned the honor of being named the 1990 NFL Rookie of the Year. In 1991-93 and 1995, he led the NFL in rushing, and was the NFL’s Most Valuable Player in 1993. Smith rushed for more yards and touchdowns than any player in NFL history. 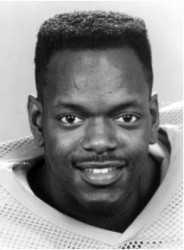 In 1999, Emmitt was named to the Gainesville Sun’s University of Florida football’s Team of the Century and was inducted into UF’s Ring of Honor.