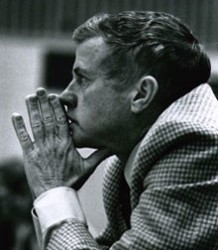 Eugene “Torchy” Clark was responsible for starting UCF’s basketball program in 1969. His first team played its first game before the squad even had a nickname. He would go on to extend his legendary career through the 1983 season, compiling a record of 274-89 (.754). Under Clark’s direction, UCF was ranked in the top 10 nationally at the Division II level for seven consecutive years and he guided the Knights to six NCAA Division II Tournament appearances. He led UCF to five Sunshine State Conference championships, and in 1978 he guided UCF to the Division-II Final Four. Clark was voted Sunshine State Conference Coach of the Year four times and was named the conference’s coach of the decade, as well. A native of Appleton, Wisconsin, Clark is also a member of the Florida Sports Hall of Fame and Sunshine State Conference Hall of Fame, in addition to the Wisconsin Basketball Coaches Hall of Fame. Following his coaching career, Clark went back in to teaching where he was an instructor in the physical education department at UCF.