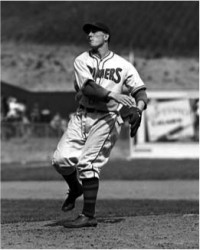 As a pitcher, Hutchinson compiled a 95-71 career record over 11 seasons, all with Detroit. He was known as a good teammate and a ferocious competitor. He also was one of the best-hitting pitchers of his time; a left-handed batter, he frequently pinch-hit and batted over .300 four times during his major league career. His career batting average was .263, with 4 home runs and 83 runs batted in. His career record as a major league manager, in all or parts of 12 seasons, was 830-827 (.501) with nine tie games. Fred Hutchinson was inducted into the Cincinnati Reds Hall of Fame in 1965 for his achievements with the team. The city of Cincinnati remembers Hutchinson as the manager that sprung their team into a string of successful winning years with the Big Red Machine.

Stricken with fatal lung cancer at the height of his managerial career as leader of the pennant-contending the Reds, he was commemorated one year after his death when his brother, Dr. William Hutchinson, created the Fred Hutchinson Cancer Research Center in the Hutchinsons’ native city of Seattle, WA.