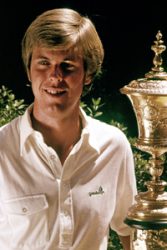 While attending the University of Florida, Fred Ridley played for the men’s golf team and was an alternate the year the Gators won the NCAA national tournament in 1973. In 1975, Ridley won the U.S. Amateur, the preeminent amateur golf tournament in the United States, where he defeated Keith Fergus in the 36-hole final, having beaten Curtis Strange and Andy Bean in previous rounds of the match-play championship. At the end of 1975, Ridley was ranked the #2 amateur in the country by Golf Digest. Ridley never turned professional and remains the last U.S. Amateur champion to have never become a professional golfer.

Ridley was elected president of the United States Golf Association (USGA) in 2004. He has also served as co-chairman of the International Golf Federation. On August 23, 2017, Augusta National announced that Ridley would succeed Billy Payne as chairman of the club.