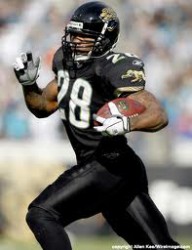 A true Floridian, Taylor is a native of Pahokee, played in college at the University of Florida, and spent his pro career with the Jacksonville Jaguars. At Pahokee he was recognized as one of the “100 greatest players of the first 100 years” of Florida High School Football by the FHSAA. At Florida he gained 3075 yards with 31 TDs and was a first-team all-American his senior year.

The 9th pick overall by the Jags in the ’99 draft, he gained over 11,000 yards, 15th on the all-time NFL list, making him the Jags all-time leading rusher. He also scored a total of 74 touchdowns. Fred was the second player inducted into the Pride of the jaguars, along with Tony Boselli.