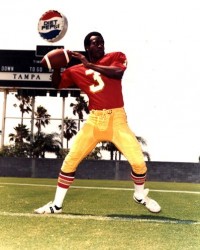 Freddie Solomon is a former Tampa University quarterback. In 1975, Solomon was the second round draft pick for the Miami Dolphins and switched to the wide receiver position. He played 11 seasons with the Dolphins, then went and played 10 seasons with the San Francisco 49ers. December 5, 1976, Solomon had a career game with the Dolphins with five catches for 114 yards and a touchdown, one rushing attempt for 59 yards and a touchdown, and a punt return for 79 yards and a touchdown. With the 49ers, Solomon won two Super Bowl Championships. He had a career total of 371 receptions, 5,846 receiving yards, and 48 touchdowns. He was selected in 1980 for the All-Pro Selection.