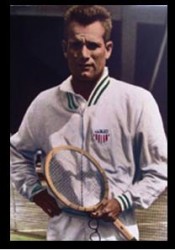 Gardnar Putnam Mulloy, commonly known as simply “Gar,” was born on November 22, 1913 in Washington D.C. He attended the University of Miami, where he founded the first tennis team for the school. As a tennis player, he was primarily known for playing doubles matches with Bill Talbert. Together, they won the U.S. Men’s doubles title in 1942, 1945, 1946, and 1948.

In 1957, with the help of Budge Patty, Mulloy was able to add the Wimbledon doubles title to his list. His tennis career came to a break when he served with the U.S. Navy in World War II. Enshrined in nine halls of fame, Mulloy has won 127 national championships and 25 international championships, including five Grand Slam doubles titles. During the late 1930s through the 50s, he was ranked in the “Top Ten: U.S. Singles 14times, and ranked in the World’s “Top Ten” several times. He was able to represent America by playing singles and doubles on seven U.S. Davis Cup teams, twice as a playing captain. Mulloy was inducted into both the University of Miami Hall of Fame and the International Tennis Hall of Fame.