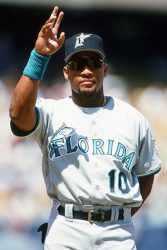 The nephew of former Major League all-star Dwight Gooden, Gary Sheffield grew up in the Belmont Heights area of Tampa. As a youngster, Gary would lead Belmont Heights to a United States Championship and an eventual second place finish at the Little League World Series. Playing for Hillsborough High School, he would go on to earn Gatorade National Player of the Year in baseball his senior season.

Drafted in the first round (6th overall) by the Milwaukee Brewers in 1986, Sheffield would go on to enjoy a spectacular playing career that spanned 22 seasons with eight different teams. His career totals included 509 home runs, 1,652 RBI and 253 stolen bases. He was a nine-time All-Star, won five Silver Slugger Awards as the top hitter at his position and was the 1992 National League batting champion.

As a member of the Florida Marlins, Sheffield helped that team to a World Series championship in 1997 and was the Sporting News Player of the Year in 1992. He was inducted into the Florida Sports Hall of Fame on Nov. 7, 2018.