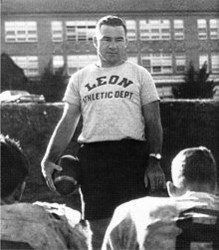 Gene Cox was a football coach at Leon High School in Tallahassee, FL. Over his 38-year coaching career at four different schools, his teams won a total of 313 games, a feat that had not been duplicated as of 2006. In 1998, the City of Tallahassee renamed the local high school football stadium for him, Gene Cox Stadium.

He received his bachelor’s degree from Florida State University in 1956 after having played on the 1954 and 1955 Florida Seminole football teams. Cox died on March 30, 2009 at the age of 74.