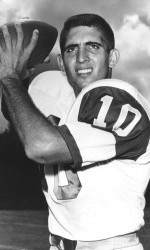 George Ignacio Mira, also known as “the Matador,” was born on January 11, 1942 in Key West, FL. He attended the University of Miami as a quarterback for the football team before being drafted by the San Francisco 49ers in the second round of the 1964 NFL Draft. He played for three different teams during his eight years in the NFL: San Francisco 49ers, Philadelphia Eagles, and Miami Dolphins. In 1971, during his stint with the Miami Dolphins, he was the backup QB for the team in their first Super Bowl appearance. After his career in the NFL, Mira played for the Montreal Aloettes in the Canadian Football League, the Birmingham Americans of the World Football League, and the Jacksonville Express of the World Football League. He retired in 1977 with the Toronto Argonauts. He was inducted in both the University of Miami Hall of Fame (1973) and the ACC Football Legend inaugural class of 2005. Perhaps his biggest honor came from his alma mater when Miami retired his number 10 jersey, an honor only bestowed upon 16 former players.