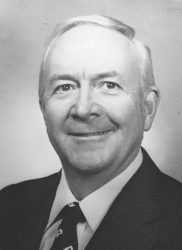 George Olsen, the man credited by many with making the Gator Bowl a nationally respected bowl game, began working there as its promotions director in May of 1950. The attendance at the previous year’s game was 18,409. On December 27, 1986, 37 years later and four days before retiring, the Gator Bowl hosted 80,000 people to watch Clemson play Stanford. That game was on CBS, the 32nd consecutive year on national network TV.

Over the years, Olsen elevated the game to national prominence and became one of the most powerful bowl chairmen in the country. At the time of his retirement, he had served more years with the Gator Bowl (37 total, 34 as Executive Director) than any other bowl chairman. He presided over the strongest years in Gator Bowl history for attendance (11 crowds of 70,000 or more and five of 80,000 or more). Under his watch, the Gator Bowl became the first bowl game to be televised coast-to-coast, and legendary teams such as Notre Dame, Penn State, Florida, Florida State, Oklahoma, Georgia, Alabama and Michigan came to Jacksonville to play in the game.

Olsen was born Oct. 11, 1926, in Floral Park, N.Y. He graduated from New York University, where he played baseball on the same team with Ralph Branca and Eddie Yost. Olsen also played two years in the Boston Red Sox system. He remained executive director emeritus of the Gator Bowl until his death on July 29, 2009.