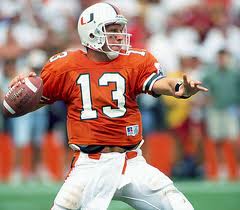 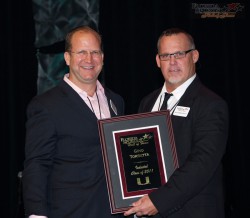 Gino Torretta was the most celebrated football player in the University of Miami and NCAA history. A 1991 graduate with a degree in Business Management, Torretta won both athletic and academic awards during his prolific career as a Hurricane.

He became only the second player in Hurricane history to win the coveted Heisman Trophy Award as the nation’s top collegiate football player. He was also honored as the Walter Camp Football Foundation’s Player of the Year.

He was tapped into Iron Arrow, as one of the University’s best ambassadors. He has also been inducted into the Orange Bowl Hall of Honor and the University of Miami Hall of Fame. 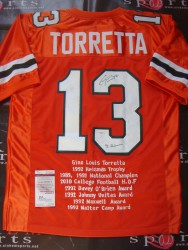 Originally from Pinole, California, Gino and his wife Bernadette reside in Miami. In 2006 he founded Touchdown Radio, nationally broadcasting a college football game of the week. He is also the Manager of Institutional Sales with Gabelli Asset Management.

Torretta has been a color commentator for collegiate and professional football games, and is currently a host on the South Eastern College Football Today Show on CSS. Among his charitable works, he hosts the Gino Torretta Celebrity Blue Tee Weekend benefiting The Torretta Foundation, which aims to find a cure for ALS and Myasthenia Gravis.

He is also a Past-President of the National University of Miami Alumni Association, a member of the Orange Bowl Committee, and in 2008 was inducted into the University of Miami’s Ring of Honor. It was announced on April 30, 2009, that Gino Torretta has been selected for induction into the College Football Hall of Fame.