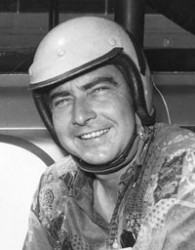 Edward Glenn “Fireball” Roberts, Jr. was born on January 20, 1929 in Tavares, FL. He was raised in Apopka where he discovered his love for car racing and baseball. Due to the fastball he developed as a pitcher for the American Legion’s Zellwood Mud Hens, he was given the nickname “Fireball.” This name also carried over to his racing career.

On May 24, 1964 at the World 600 race in Charlotte, an accident resulting in a fire would send Fireball Roberts to the hospital with second to third degree burns on 80{2b86e4e0f61ae6d3bfe06f60af27d67f0c41ea6a41df9a8d774b9bfb7eef9688} of his body. For several weeks, he battled his injuries, but sadly passed away on July 2, 1964. In addition to his career wins, Roberts was inducted into the International Motorsports Hall of Fame in 1990 and Motorsports Hall of Fame of America in 1995.