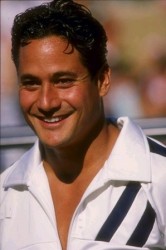 Greg Louganis was an Olympic Diver. He received the James E. Sullivan Award from the Amateur Athletic Union (AAU) in 1984 as the most outstanding amateur athlete in the United States and attended the University of Miami on a scholarship for Diving. Louganis won a silver medal in the tower event at the 1976 Olympics in Montreal. After sitting out the 1980 Olympics due to the Americans boycotting the Moscow games, Greg competed once again in the 1984 games in Los Angeles where he won gold medals in the 3-meter springboard and the tower events. After winning the last two of his five overall world championship medals, Louganis competed in his final Olympic games, 1988 in Seoul, Korea. He suffered a concussion after hitting his head on the springboard during the preliminary rounds while performing a reverse 2.5 pike. He completed the preliminaries despite his injury, and went on to repeat the dive during the finals, earning yet another gold medal. His comeback earned him the title of ABC’s Wide World of Sports “Athlete of the Year” for 1988.