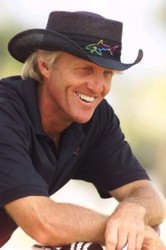 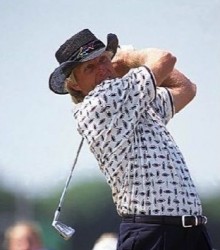 Gregory John Norman (a.k.a. The Great White Shark) turned pro in golf in 1976 and earned his first career victory at the West Lake Classic in Adelaide, South Australia. He joined the European Tour in 1977, where he won his first Australia Open in 1980 in addition to 13 other events. Norman’s next move was to join the U.S. PGA Tour. With the PGA Tour, Norman won 20 events. Due to his success, Greg was named PGA Player of the Year in 1995, which is considered to be his best year.

Norman has earned more than $1 million five times on the PGA Tour, including three Arnold Palmer Awards as the Tour’s leading money winner. He was also the first person in Tour history to surpass $10 million in career earnings. He has 30 top-10 finishes in Majors, or more than 38{2b86e4e0f61ae6d3bfe06f60af27d67f0c41ea6a41df9a8d774b9bfb7eef9688} of those he has entered. Norman won the PGA Tour of Australia’s Order of Merit six times. He won the European Tour’s Order of Merit in 1982, and topped the PGA Tour’s Money List in 1986, 1990, and 1995. He won the Vardon Trophy for lowest scoring average on the PGA Tour three times and was inducted into the World Golf Hall of Fame in 2001.

His dominance over his peers (despite his comparative lack of success in the majors) was probably best expressed in the Official World Golf Rankings: Norman finished the season on top of the ranking list on seven occasions, and was second three times. In 1986, Norman was awarded the BBC Sports Personality of the Year Overseas Personality Award, a feat he replicated in 1993 to join Muhammad Ali and Björn Borg as multiple winners. He received the 2008 Old Tom Morris Award from the Golf Course Superintendents Association of America, GCSAA’s highest honor, at the 2008 Golf Industry Show in Orlando. Norman is a member of The Environmental Institute for Golf’s board of trustees and also chairs The Institute’s advisory council.