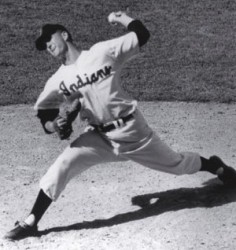 Herbert “Herb” Jude Score was a Major League Baseball pitcher who came up as a rookie in 1955 with the Cleveland Indians. He quickly became one of the top power pitchers in the American League going 16–10 with a 2.85 ERA in his first year. A left-hander, Score struck out 245 batters in his rookie year, a rookie record that stood until 1984, when it was topped by Dwight Gooden. Herb was named AL Rookie of the Year and was later named to two All-Star teams (1956-1957).

On May 7, 1957, against the New York Yankees, Score was struck in the face by a line drive off the bat of Gil McDougald, breaking numerous bones in his face and leaving him bloodied. McDougald reportedly vowed to retire if Score was blinded as a result, but Score actually eventually recovered his 20/20 vision, though he missed the rest of the season. Score returned late in the 1958 season.

Though many believe he feared being hit by another batted ball, and thus changed his pitching motion, Score himself rejected that theory. In the book “The Greatest Team Of All Time” (Bob Adams, Inc, publisher. 1994), Mickey Mantle picked Herb Score as the toughest American League left-handed pitcher he faced (before the injury). Yogi Bera picked Herb for his “Greatest Team Of All Time”.

After retiring, Score served as an announcer on the Indians television broadcast from 1964-1967, and joined the radio broadcast, serving from 1968-1997, the longest career for an Indians play-by-play announcer. Score was revered by fans for his announcing style, including a low voice and a low-key style, as well as a habit of occasionally mispronouncing the names of players on opposing teams. Score’s final Major League Baseball game as play-by-play announcer was Game 7 of the 1997 World Series.