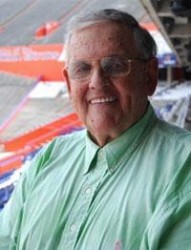 Hubert Mizell has one of America’s deepest, most spectacular resumes as a sports journalist. For more than 40 years, he wrote for large newspapers including the St. Petersburg Times and also served as a featured analyst for Associated Press based in Miami and New York.

Born in Georgia, he was raised in Jacksonville, FL. Hubert’s list of assignments has been stunning, including 10 Olympics, 32 Super Bowls, 25 baseball World Series, 30 NCAA basketball Final Fours, nine Wimbledon tennis championships, 22 Kentucky Derbies, 23 Daytona 500s, 25 different college football bowls and 40 Masters plus 50 other major golf championships. He was named national sports columnist of the year in 1982 from among America’s largest newspapers and eight times was voted Florida Sports Writer of the Year. Mizell is a member of the College Basketball Writers Hall of Fame.