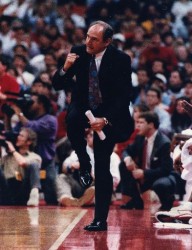 Hugh Durham is the only coach in the history of NCAA Division I basketball to lead two different schools to the NCAA Final Four for the first and only time in each school’s history (Florida State University in 1972; University of Georgia in 1983). In 1972, Durham led FSU to the NCAA Championship game coaching against Adolph Rupp, Dean Smith and John Wooden in consecutive NCAA Tournament games. Durham’s Seminoles knocked off Rupp’s Kentucky Wildcats and Smith’s North Carolina Tar Heels. In the NCAA Championship game, Wooden’s UCLA Bruins edged FSU to win the title. Durham is also the only coach in NCAA Division I history to be the all-time winningest coach at three different Universities. His career spanned 5 decades at FSU, Georgia, and Jacksonville University. In 1966-67, Durham signed Lenny Hall who was the first African-American basketball player at Florida State University. In 2003, Durham became only the 32nd basketball head coach in NCAA Division I history to win 600 career games. When he retired from coaching in 2005, Durham was the 8th winningest coach among active NCAA Division I coaches with 633 victories. He had coached in 1,062 games, the 3rd highest number of games for a head coach in NCAA Division I history. Durham was the 25th winningest coach in NCAA Division I history and had been voted conference Coach of the Year four times in the Southeastern Conference and once in the Metro Conference. During his career, Durham coached nine All-Americans, four Academic All-Americans, four first round NBA draft picks, had 31 players drafted by the NBA, plus sent two players to the US Olympic basketball team. Durham was a highly recruited three-sport star at Eastern High School. He was an all-state quarterback and all-region in basketball. He chose to play basketball in college and accepted a scholarship offer from Florida State University. Durham was inducted into the Florida State University Hall of Fame in 1990, the Kentucky High School Hall of Fame in 1994, and the Georgia Sports Hall of Fame in 2009.