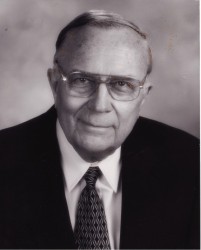 John M. “Jack” Hairston was born on November 13, 1928 in Jackson, MS and died on May 15, 2010 in Gainesville, FL. Jack was a sports journalist for more than 50 years. He was the sports editor of The Gainesville Sun for 20 years, and The Jacksonville Journal for 14 years. He previously wrote for The Atlanta Constitution, The Jackson Daily News, and The New Orleans Item.

Jack was the president of the Football Writers Association of America (FWAA) and was awarded the prestigious Bert McGrane Award in 1991, given annually by FWAA for lifetime contributions to the profession. The achievement of which he was most proud was that many of the men who had worked for him early in their careers advanced to sports writing jobs at large newspapers. From 1991 to 2006 Jack was owner and publisher of Gator Pipeline, a seasonal paper about Gator Football. In 2002 Jack wrote the book, Tales from the Gator Swamp. He proudly served as the chairman of the Heisman Trophy Committee for the state of Florida for 40 years.

Over the years Jack covered many of the world’s top sports events, including the Olympic Games, Super Bowl, World Series, NCAA Final Four, and world championship fights, among others.