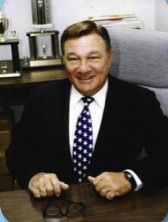 Jack Nelson began his swimming career at Lafayette, IN in high school. For college, he chose to attend the University of Miami; however, his collegiate career was interrupted with a stint in the U.S. Air Force. Nelson was able to be part of the 1958 and 1959 UM aquatics teams, at which he excelled in every meet. In 1958, he was honored as an All-American. Nelson was able to accomplish a lot during his swimming career. He was a head Olympic, World Games, and Pan American Games coach; a three-time world record older and Olympian; and the only person in the history of USA Swimming who has served as both an Olympian and Olympic head coach. Nelson has been enshrined in the Greater For Lauderdale Sports Hall of Fame, the University of Miami Sports Hall of Fame, the Saint Thomas Aquinas Hall of Fame, the North Carolina Hall of Fame, and the International Swimming Hall of Fame. He is now considered to be one of the best high school swim coaches in America, with a record of 30 state titles.