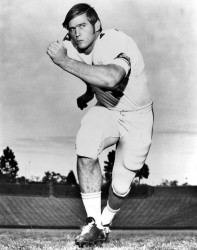 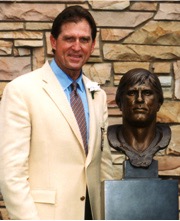 Regarded as the best defensive-end in Florida Gator football history, Jack Youngblood was named to the All-SEC Team of the Decade for the 1970’s. Following his final college season in 1971, the All-American played in the Senior Bowl game and was named the Most Outstanding Player in the contest. Jack is widely considered one of the best five players in the Gator’s history. In 1999, Youngblood was named to Gainesville Sun’s UF Team of the Century and was inducted into the program’s Ring of Honor the same year.

Jack was a rugged competitor who went on to become a five-time consensus All-Pro star with the Los Angeles Rams after being a first-round draft selection in 1971. In 1973, he went to his first of seven Pro-Bowls while leading the Rams with 16 ½ sacks. Youngblood earned the title of NFC Defensive Player of the Year in back-to-back seasons (1975-76). One of the athletic feats for which Youngblood is best known, is that of playing the entire 1979 playoffs, including Super Bowl XIV, with a fractured left fibula. Jack was named to College Football Hall of Fame in 1992 and the NFL Hall of Fame in 2001.” Dundee,Angelo,1976,Boxing,,,,,Dundee trained many world class boxers