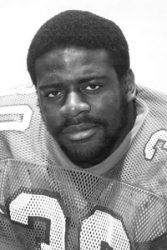 James Jones played fullback for coach Charley Pell’s Florida Gators football team that posted the biggest one-year turnaround in the history of NCAA Division I football: from 0–10–1 in 1979 to an 8–4 bowl team in 1980. Jones finished his Gator career with 2,026 yards rushing, 593 yards receiving and 48 yards passing, and led the team in rushing yardage for three consecutive seasons. In 1998, he was later inducted into the UF Athletic Hall of Fame as a “Gator Great”. In 2006, The Gainesville Sun sportswriters ranked him as the No. 45 all-time greatest Gator from the first century of the Florida Gators football team.