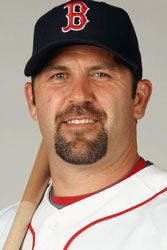 Jason Varitek burst onto the national scene at an early age, leading his Altamonte Springs Little League team to a US National Championship. He would earn All-America honors and win both the Dick Howser Award and Golden Spikes Award as the nation’s top college player at Georgia Tech, where he also led the Yellow Jackets to the finals of the College World Series. Drafted in the first round of both his junior and senior seasons, Jason would eventually embark on a 14-year major league career with the Boston Red Sox, where he played in three all-star games and won two World Series Championships.