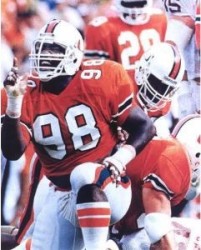 Among his more notable moments as a Miami player, five days before the 1987 Fiesta Bowl, at a promotional dinner with the Penn State team, Brown led a walkout by the Miami players. Leading the walkout, he asked: “Did the Japanese go sit down and have dinner with Pearl Harbor before they bombed them?” Brown and his teammates felt that the Penn State players had disrespected them by openly mocking Miami’s coach, Jimmy Johnson, at a pre-game banquet. Penn State beat the heavily-favored Hurricanes 14-10, and were declared National Champions.

Brown was drafted in the first round (ninth overall) of the 1987 NFL Draft by the Philadelphia Eagles. During his five-year professional career with the Eagles, he was twice selected to the Prowl Bowl (in 1990 and 1991).

Jerome died on June 25, 1992, at the age of 27, following an automobile accident in which both he and his nephew, Gus, were killed when Brown lost control of his car at high speed and crashed into a power pole. Brown was buried in Brooksville, FL. Brown’s jersey number (#99) was retired by the Eagles on September 6, 1992, in an emotional ceremony prior to the Eagles’ first game of the 1992 season.

After his death, Eagles players and fans started the unofficial motto, “Bring it home for Jerome,” an indirect reference among Eagles fans to bringing a Super Bowl title to the city in Brown’s honor. A sign of the fondness with which Eagles fans continue to view Brown, the saying has continued to this day, nearly 20 years following his death.