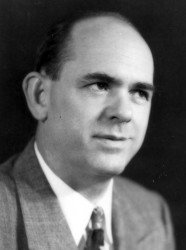 Jerry Collins is known as the ‘‘Father of Greyhound Racing” in the United States. Collins was a multi-millionaire racetrack owner, philanthropist and former Florida state legislator.

Born in Danville, VT, Jerry became one of the nation’s most homespun entrepreneurs. After quitting high school in Sarasota, he moved to Fort Myers, where he worked as a motorcycle police officer, escorting such business legends as Henry Ford, Thomas Edison and Henry Firestone.

Inspired by their business acumen, Collins moved back to Sarasota in the late 1930s, operating a gas station and later working as a used-car salesman. He bought the Sarasota Kennel Club – the first piece of his racing empire – in 1945 by assuming responsibility for $5,005 in back taxes. Over the years, Jerry would shrewdly expand his racing properties to include greyhound tracks in Orlando and Daytona Beach, South Dakota, Colorado and Havana, Cuba. He also owned horse tracks in South Dakota and Oregon.

While Collins was an avid racing fan, he made time for other business interests. He owned four circuses, including the Clyde Beatty-Cole Brothers Circus, which he later donated to Florida State University. The college later sold it for $2 million. During World War II, Mr. Collins ran for the Florida Legislature and eventually served four terms.

Though known as a shrewd businessman, Collins’ generosity brought him greater notice. A founder of New College in Sarasota, Jerry gave the institution a $1.2 million motel he owned in Bradenton and raised another $7 million for a library. He also gave $600,000 for a new veterinary school at the University of Florida.