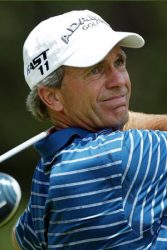 Although born in Macon, Ga., golfer Jerry Pate has always called Pensacola his home, having grown up in the city from an early age. Pate attended the University of Alabama, where he earned All-America honors in both 1974 and 1975. His amateur accomplishments included winning the 1974 US Amateur and he was also a member on the winning USA team for both Eisenhower and Walker Cup competitions.

Pate concluded his amateur career by tying Jay Haas as low amateur at the 1975 US Open. Jerry would turn pro that same year and would embark on a remarkable PGA career that included eight tour victories.  His career highlights include winning the 1976 US Open as a rookie. He also won the 1982 Players Championship at Ponte Vedra, after which he completed perhaps the Tour’s most memorable celebration by throwing PGA Tour Commissioner Dean Beman and golf course architect Pete Dye into the lake beside the 18th green before diving in himself.

Other high major finishes included a third place finish in the Masters in 1983 and a second place finish in the 1978 PGA Championship. Joining the Champions Tour at Age 50, Jerry won twice on that circuit and has 15 professional victories World Wide. Jerry was enshrined into the Florida Sports Hall of Fame on Nov. 7, 2018.