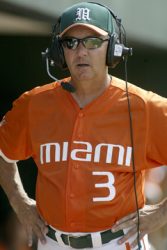 In his 25 years at the helm of the University of Miami Baseball, there wasn’t much Jim Morris didn’t accomplish. Morris won more than 1,000 games in his time with the Hurricanes. He was named the National Coach of the Year in 1999 and 2001. He won two College World Series Championships (also in 1999 and 2001) and made it to Omaha 13 of his 25 years. At Miami, Morris’ teams made the postseason 23 times. Morris helped lead the charge on funding of Alex Rodriguez Park at the University of Miami. He ended his career with 1,590 wins and became only the 6th coach in Division I history to eclipse 1,500 wins. Morris was elected to the National College Baseball Hall of Fame in 2020.