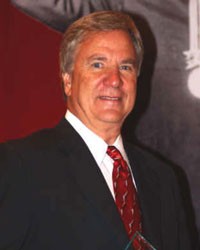 Jimmy Carnes (born 1935) is a former American track & field athlete, coach and administrator. A successful coach at the high school, college and international levels, Carnes compiled a 161–11 career dual meet record, highlighted by four college conference championships and six state high school championships. Carnes was the head coach of the U.S. Olympic track & field team and the University of Florida track & field team, the founder of the Florida Track Club, and a member of the U.S. Track & Field Hall of Fame. 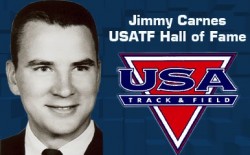 In 1964, Carnes became the head coach of the UF track & field team; he was just 28 years old. From 1965 to 1976, Carnes‘ Florida Gators teams finished in the top-3 in the Southeastern Conference (SEC) 15 times, won 2 SEC indoor track championships, and compiled a 93–3 overall record in dual meets. Among his many Gators track & field athletes were 65 SEC individual champions, 4 NCAA individual champions and 24 All-Americans.

In 1965, Carnes founded the Florida Track Club in Gainesville, an amateur track & field organization that helps train high school athletes, college-level transfer students, future Olympians and other post-graduate competitors. Over the following decade, the Florida Track club became a magnet for serious track & field athletes training for international competitions. Carnes recruited 55 graduate student-athletes for the Florida Track Club by offering several of them assistant coaching positions and helping many of them obtain graduate assistantships within the university to help continue their graduate studies.

In 1973, Carnes co-founded Athletic Attic, one of the nation’s first sports equipment chain stores. At the peak of the running craze, Athletic Attic had over 165 stores in the United States, Canada, Japan and New Zealand with over $40 million in annual revenue. Carnes resigned as the Gators track coach in September 1976 to devote himself to his Athletic Attic business interests and his Olympic coaching.

Carnes made numerous contributions to United States track & field at the international level. He served as the assistant coach of the U.S. men’s track & field team for the 1976 Montreal Olympics, and the head coach of the U.S. men’s track & field team that was forced to boycott the 1980 Moscow Olympics because of the Soviet Union’s 1979 invasion of Afghanistan. From 1980 to 1984, Carnes served as the founding president of the U.S. Track & Field Federation. Since 1979, Carnes has also been a member of theBoard of Directors of the International Special Olympics.