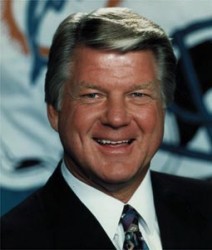 Jimmy Johnson can now be seen on Fox NFL Sunday but he made his mark on the sport of football a long time before. Jimmy first made a name for himself at the University of Miami where he coached for five seasons and compiled a 52-9 record with one national championship. He coached the Hurricanes to the school’s first undefeated season in history in 1986. In 1989, longtime friend and Dallas Cowboys owner Jerry Jones asked Johnson to coach the Dallas Cowboys. Johnson coached there from 1989-1993 and won back to back Super Bowls. He is one of only six coaches to do so in the NFL. In 1996, Johnson returned to the city of Miami, this time to coach the Dolphins. He coached with the Dolphins until 1999 and returned to Fox, where he remains today.