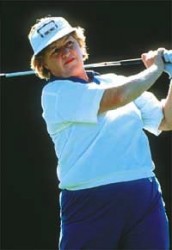 JoAnne Gunderson Carner (born April 4, 1939) is a former professional golfer. Her 43 victories on the LPGA Tour led to her induction in the World Golf Hall of Fame. She is the only woman to have won the U.S. Girls’ Junior, U.S. Women’s Amateur, and U.S. Women’s Open titles, and was the first person ever to win three different USGA championship events. Tiger Woods is the only man to have won the equivalent three USGA titles. Arnold Palmer, Jack Nicklaus, and Carol Semple Thompson have also won three different USGA titles.

In 1981, Carner was honored with the Bob Jones Award, the highest honor given by the United States Golf Association in recognition of distinguished sportsmanship in golf. She captained the 1994 U.S. Solheim Cup team.