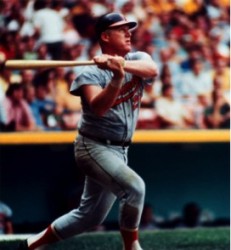 John Wesley “Boog”Powell was born on August 17, 1941 in Lakeland, FL. Powell made his Major League Baseball (MLB) debut on September 26, 1961 for the Baltimore Orioles after leading the International League in home runs.

After 3 seasons as a third baseman and left fielder, he was moved to first base in 1965. Although defensively needing time to adjust, Powell proved his extreme worth offensively by hitting 25 home runs in 1963 and 39 in 1964. He remained with Baltimore through their glory years, which included two World Series titles, before being traded to the Cleveland Indians in 1975.

After just one season, Powell was again traded, this time to the Los Angeles Dodgers. His last MLB appearance came on August 24, 1977. Over a 17-season career, Powell posted a .266 batting average for 339 home runs in 1,187 runs batted in.