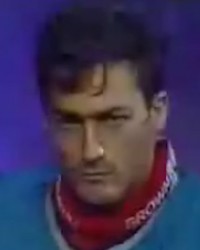 A native of the Detroit area, Vanbiesbrouck played for 5 NHL teams: the Rangers, Panthers, Flyers, Islanders and Devils. He gained most of his fame during the 5 years he played for the Florida Panthers, being named an all-star three times (MVP of the 1994 game) and leading the Panthers to the Stanley Cup finals in 1996. He is the winningest American-born goalie in history, and 13th overall in NHL history.

In addition to his career with the expansion Panthers, he won the Vezina Trophy as top goalie in the NHL in 1985-86 and was named a first team all-star post-season.