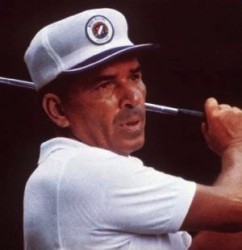 While other players often walked around a hole and studied the green for several minutes before putting – sometimes from their knees, Boros is remembered for not wasting any time. He would walk up to ball and “just do it”. Noted for his relaxed, nonchalant looking swing and manner, he is remembered for his catch phrase “swing easy, hit hard”. Boros was also instrumental in starting the Senior PGA Tour in the late 1970s.

Boros suffered a fatal heart attack in 1994 on the golf course at the Coral Ridge Country Club in Fort Lauderdale, FL.