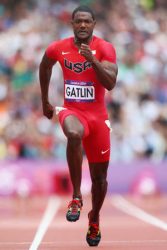 A native of Pensacola, Justin Gatlin attended Woodham High School in Pensacola before earning a track scholarship at the University of Tennessee.  At UT, Gatlin was converted from a hurdler to a sprint specialist. In two seasons of competition, Gatlin would win six NCAA individual titles in various sprint events before turning pro.

In 2004, Gatlin earned the title “World’s Fastest Man” when he took the Gold Medal in the 100-meter dash at the Summer Olympics in Athens, Greece. During his career, he won medals in 17 different Olympic and World Championship events.  To the shock of many, Gatlin won the 2017 World Championship in the 100 meters, defeating teammate Christian Coleman (silver) and Usain Bolt (bronze) in a time of 9.92 seconds.