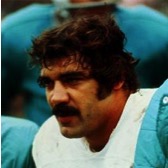 Larry Richard Csonka (born December 25, 1946) is a former collegiate and professional American football fullback. Csonka played his college career at Syracuse University where he received All-American honors. Csonka began his pro career with the Miami Dolphins, where he was a five time Pro-Bowl selection. He led the Dolphins to victory in Super Bowl VII and in Super Bowl VIII, in which he was also given the MVP award. In 1975, Larry played with the Memphis Southmen on the WFL. In 1976 he returned to the NFL to play with the New York Giants and then the Dolphins once again. In his 11 NFL seasons, Csonka carried the ball 1,891 times for 8,081 yards and 64 touchdowns. He also caught 106 passes for 820 yards and four touchdowns. He was among the NFL’s top 10 ranked players in rushing yards four times, in rushing touchdowns five times, total touchdowns three times and yards from the line of scrimmage once. He earned All-AFC honors four times and was named All-Pro in 1971, 1972, and 1973. His number 39 has been retired by the Miami Dolphins.