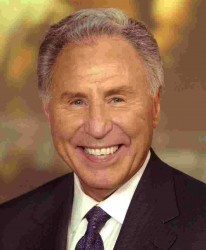 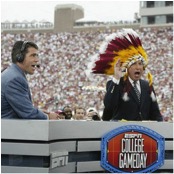 Leland “Lee” Corso (born 1935) is a sports broadcaster and football analyst for ESPN. He has been featured on ESPN’s College Game Day program since its inception and appears annually as a commentator in EA Sports’ NCAA Football. In the off season, Corso serves as Director of Business Development for Dixon Ticonderoga, a Florida based pencil manufacturing company.

Corso was born in Lake Mary, FL and attended Miami Jackson Senior High where he played quarterback. He played college football at Florida State University. As a defensive player, he set the school record for most career interceptions (14), a record which stood for more than two decades until it was broken by Monk Bonasorte. Corso was also a successful baseball player for FSU. 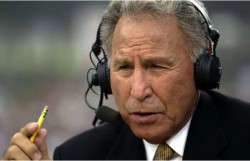 Corso was the head coach of three NCAA football programs: the University of Louisville, Indiana University, and Northern Illinois University. Corso amassed a 73-85-6 record in his 15 years as a collegiate head coach. He also coached the USFL Orlando Renegades in 1985 to a five and thirteen season.