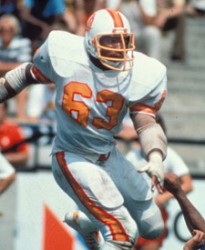 In 1976, Lee Roy Selmon was the first player picked in the NFL draft, the first-ever pick for the then-brand-new expansion team, the Tampa Bay Buccaneers. He joined older brother Dewey, who was a second round pick of the Bucs. In his first year, Lee Roy won the team’s Rookie of the Year and MVP awards. Selmon went to six straight Pro Bowls and was named NFL Defensive Player of the Year in 1979. Former Detroit Lions coach Monte Clark compared him to, “A grown man at work among a bunch of boys.” A back injury made the 1984 season his last, and the Bucs retired his number, 63, in 1986. He was the first player to be inducted into the Tampa Bay Buccaneers Ring of Honor on November 8, 2009.

After retiring, Lee Roy stayed in Tampa, working as a bank executive and being active in many charities. From 1993-2001, Selmon served as an assistant athletic director at the University of South Florida eventually moving up to take over the athletic department as Athletic Director. As the USF Athletic Director, Selmon launched the football program, spearheaded the construction of a new athletic facility and led the university’s move into Conference USA and then into the Big East Conference. Citing health issues, Selmon resigned as the USF Athletic Director in 2004.