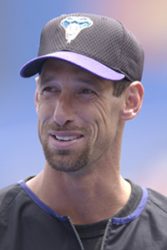 Nicknamed “Gonzo”, Luis Gonzalez played 19 seasons for seven MLB teams. His best years were with the Arizona Diamondbacks and was one of the most popular players in the organization’s history. His game-winning hit in Game 7 of the 2001 World Series against New York Yankees closer Mariano Rivera clinched the Diamondbacks’ first and only World Series championship to date.

Gonzalez was a five-time All-Star and won a Silver Slugger Award in 2001. In addition to good power (354 career home runs), Gonzalez was known as an exceptional gap hitter. His 596 career doubles currently rank 19th on the all-time MLB list.

After retiring from baseball in 2008, Gonzalez joined the Diamondbacks’ front office in 2009 as a special assistant to the president.

The following year, the team retired his uniform number #20, making him the first player so honored by the Diamondbacks.