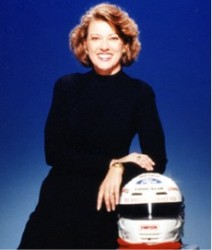 Lyn St. James was an Indy car driver with five Indy Racing League starts. St. James set the world record on closed-court for women reaching 225.722 mph during the 1995 Indy 500 qualification weekend. She is one-of-five women to qualify for the Indy 500. St. James was a two-time winner of the 24 hours of Daytona. She is also the winner of 12 hours of Sebring. In 1992, St. James was the first women to win the Indy 500 Rookie of the Year Award. She had seven Indianapolis starts in nine years. Lyn was also a motivational speaker. She founded 501c3 Women in the Winner’s Circle Foundation in 1994. She was in “Sports Illustrated for Women” Top-100 Women Athletes of the Century. Lyn was the winner of the 2001 Guiding Women in Sports Award, the 200 Office Depot Visionary Sportswoman of the Year, the 2006 Northwood University Distinguished Woman of the Year, and the 2008 Automotive Hall of Fame Distinguished Service Award.