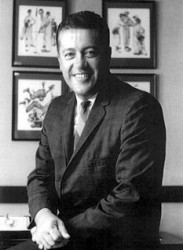 Marcelino “Chelo” Huerta played football at the University of Florida from 1947 to 1949 after serving in the U.S. Army. Huerta served as football coach at Tampa 1952-61, Wichita State 1962-64, and Parsons 1965-67. He had an overall coaching record of 98-58-3, a winning percentage of .626. His records at each school were Tampa (10 years) 67-33-2, Wichita (three years) 14-15, and Parsons (three years) 23-5. His 1963 team at Wichita State had a 7-2 record, was co-champion of the Missouri Valley Conference, and ranked second in the nation in total offense. He has also been named to the University of Florida Hall of Fame, University of Tampa Hall of Fame, and College Football Hall of Fame. He was founder of a group called, “Football Players for Crippled Children,” served on the President’s Council on Endowment for the Handicapped and received the Pop Warner Award for his work with junior athletes.