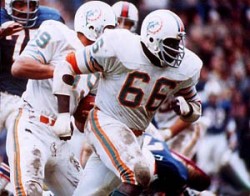 Perfection isn’t a word commonly used to accurately describe any situation or event. However, for the 1972 Miami Dolphins, perfect is indeed the word they earned the right to own.

Following an embarrassing 24-3 Super Bowl loss to the Dallas Cowboys, the Dolphins came back stronger than ever with not only a Super Bowl title, but an undefeated season as well. Comprised of QB Brian Griese, Larry Csonka, Jim Kiick, Mercury Morris, and many others, Don Shula was able to steer his team to a record and title which none have been able to match thus far. The Dolphins capped their perfect season with a 1972 Super Bowl win over the Washington Redskins on a score of 14-7.

So far, six players from the team are enshrined in Pro Football’s Hall of Fame. In July 1997, Head Coach Don Shula joined them in receiving this honor.