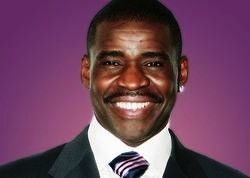 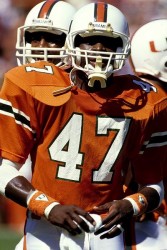 Michael Jerome Irvin was a football star at St. Thomas Aquinas High School in Ft. Lauderdale. With the University of Miami, Irvin set school records for career receptions (143), receiving yards (2,423) and touchdown receptions (26). He was part of Miami’s 1987 National Championship Team, and made one of the most legendary plays in school history that year, scoring on a 73-yard 4th quarter touchdown pass from Steve Walsh that provided the margin of victory in Miami’s triumph over archrival Florida State, which propelled them into the National Championship Game against the top-ranked Oklahoma Sooners in the Orange Bowl.

Irvin was drafted by the Dallas Cowboys in the 1988 NFL Draft. The Cowboys began to improve under the strength of “The Triplets” – Irvin, Troy Aikman, and Emmitt Smith. They finished the 1990 season 7–9, and then recorded an 11–5 record in 1991. Irvin was a major reason for their playoff season of 1991, finishing with 93 receptions, an NFL-best 1,523 yards, and eight touchdowns. He made the All-Pro team that year and was selected to the 1st of five consecutive Pro Bowls. 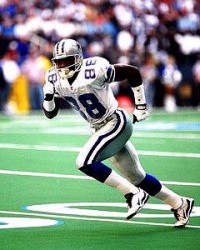 From 1991 through 1998, Irvin recorded 1,000-yard seasons in all but one year, racking up an impressive 10,265 yards over an 8-year span. Along the way, the Cowboys captured three Super Bowl titles. His best season was in 1995, when he set Dallas records for receptions (111) and receiving yards (1,603), while also scoring 10 touchdowns and setting an NFL record with 11 games with over 100 yards receiving. He added seven receptions for 100 yards and two touchdowns in the NFC Championship Game en route to the Cowboys’ 3rd Super Bowl win in a span of four seasons. Michael was inducted into the Pro Football Hall of Fame in 2007.

Since retiring from his playing days, Irvin has enjoyed a successful TV career including stints with ESPN and the NFL Network.