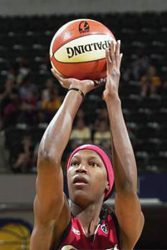 Often considered the best women’s basketball player from the state of Florida, Michelle Snow grew up in Pensacola and attended Woodham High School – where she earned All-America honors and was the Florida Dairy Farmers’ Miss Basketball in 1998.

Snow would go on to play four years at Tennessee under legendary coach Pat Summitt, where she helped the Vols to four SEC Championships and a pair of final four appearances. She would be drafted in the first round of the WNBA Draft (10th overall) and go on to a 13 year professional career.

Selected the WNBA’s Most Improved Player, Snow was two-time WNBA All-Star, represented her country in international competition and also played professionally in Europe. She was enshrined in the Florida Sports Hall of Fame on Nov. 7, 2018.