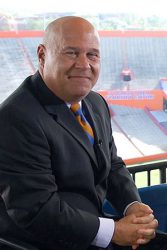 Oh my! Nothing represents University of Florida Gator sports better than its affable longtime play-by-play announcer Mick Hubert. Travel the byways of the state of Florida on any Saturday and you’ll hear Mick’s familiar voice up and down your radio dial. A graduate of Illinois State University, Mick has long served as the voice of University of Florida Athletics.

In his storied career, Mick has been behind the mike for some of the biggest moments in Florida Gator Sports history, including the school’s three national championships in football, two NCAA championships in basketball and the Gators victory in the 2017 College World Series victory in Omaha.

Prior to his arrival in Gainesville, Hubert served as sports director of WHIO-TV in Dayton, Ohio where he was also the play-by-play man for Dayton Athletics. He also called NCAA Basketball Tournament games for ESPN from 1986 until 1990. Mick was enshrined into the Florida Sports Hall of Fame on Nov. 7, 2018.