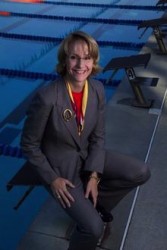 Nancy Hogshead was an Olympic swimmer for the United States. In the 1984 Olympics, she won three gold medals and one silver medal in medley and freestyle swimming. While attending Episcopal High School in Jacksonville, Nancy won three national butterfly championships: 100 yards and 200 meters in 1977 and the 200-yard event in 1978. She was offered a scholarship to Duke University where she was again undefeated in dual meets and set a school record in eight different events. She only swam for one year at Duke, but she was a four-time ACC Champion and two-time All-American for 1981. She is now a lawyer, writer, and asthma spokesperson.