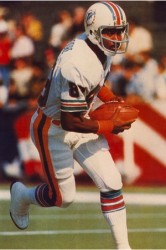 Nathaniel Moore was born on September 19, 1951 in Tallahassee, FL. He attended Miami Edison Senior High School and Miami-Dade Community College before moving to the University of Florida to become a standout running back. After being drafted by the Miami Dolphins in the 3rd round of the 1974 draft, he played for them his entire career of 13 years. After just 3 seasons in the NFL, Nat was selected to play at the Pro Bowl. By the time he retired at the end of the 1986 season, Moore had managed to break nearly every receiving record possessed by the Dolphins. He finished his career with 510 receptions; 7, 547 yards; 74 touchdowns; and 249 rushing yards. Known for his giving spirit, in 1984, Moore was honored as the NFL’s “Man of the Year,” an award given to a player who gives outstanding service to his community. He received yet another service award in 1986 when he was honored with the Byron White Humanitarian Award. After his retirement, Moore serves as a football broadcaster for the Florida Gators on the Sunshine Network, works for the Miami Dolphins Alumni Association, and is the executive director for the NFL Pro Bowl Football Clinic.