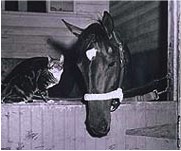 Needles, born in 1953 to Bonnie Heath, was an American Hall of Fame Champion Thoroughbred racehorse. Bred and raced in Florida, the colt was the son and grandson to Kentucky Derby winners, Ponder and Pensive.

At the beginning, Needles had to overcome a lot of odds as a foal, dealing with constant sickness and unstable conditions. It was during this time that the horse received his name, due to the amount of needles used by vets when trying to care for him. He soon overcame these barriers to win the Hopeful Stakes as a 2-year-old, which led to him receiving the 1955 Championship for 2-year-old horses.

In 1956, Needles won the Kentucky Derby, ridden by David Erb. His victory marked the first time a Florida-bred horse won America’s most prestigious horse race. After a 2nd place finish in the Preakness, Needles came back to win the 3rd jewel of the Triple Crown, the Belmont. After his performance, Needles earned another championship as a 3-year-old colt in 1956.

He retired from racing as a 4-year-old in 1957 and returned home to Florida for stud. He died at the age of 31 in 1984. In 2000, Needles was inducted into the United States National Museum of Racing and Hall of Fame.