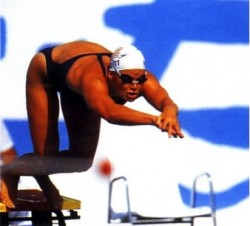 The St. Petersburg, FL native and 1997 University of Florida graduate won three gold medals (the most of any U.S. competitor and tied for the most golds of any female athlete) in the 1992 Olympics in Barcelona, Spain. Haislett’s titles came in the 200 freestyle, 400 individual medley (prelims) and 400 freestyle relay (her team broke the world record).

In addition to the Olympic Gold, Haislett was named Southeastern Conference Swimmer of the Year in 1993 and 1994 as a member of the Gator Swim team. She was the SEC high-point scorer in 1991-93. Haislett held seven NCAA individual championships and was a member of two team relay championships.