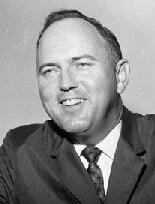 During his more than four decades behind the microphone, Otis Boggs called more than 300 football games and countless basketball games for the University of Florida. A native of Clemson SC, he graduated from Auburndale (FL) High School, the Valedictorian of his 1937 senior class, and graduated in 1943 from the University of Florida with a joint degree in chemistry, German, English and history. His radio career began in 1938 announcing high school basketball games for Gainesville’s WRUF, the AM radio station at the Florida College of Journalism. The next year he was promoted to color commentator, then play-by-play in 1940.  Over the years, Boggs’ Gator football broadcasts from the Gator Football Network were aired over numerous Tampa Bay and Central Florida stations, as well as others throughout the state. He retired from the broadcast booth in 1982 – succeeded by David Steele – but continued working behind the mike as host of a Gator pre-game show. He had a long association with WRUF and at one time was its sports director. Late in his career, he teamed with Bob Leach (“The Bob and Otis Show”) and then Jim Finch (“The OJ Show”) for popular morning talk shows on the station. He was Florida’s Outstanding Sportscaster from 1960-1963, the recipient of the distinguished Alumni Award from Florida’s Journalism and Communication College in 1989, a charter member of the WRUF Hall of Fame, and a member of the Florida Sports Hall of Fame (1990).  On August 28, 2002, the longtime “Voice of the Gators” died at the age of 82 following a lengthy illness.